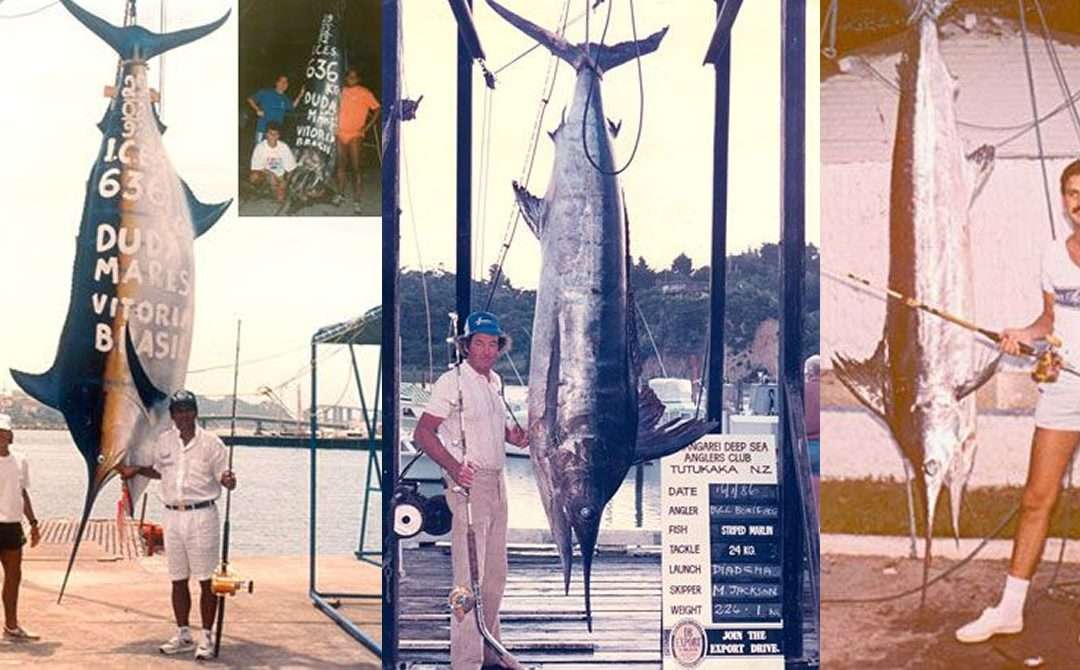 Marlin is a prized game fish, mostly because it offers a big challenge to the angler as it fights longer and harder than other species. I would defiantly agree, bigger Marlin has been landed commercially and by recreational anglers not all meet the IGFA rules. Pictured in the header are some of the largest Marlin ever caught, which is on record and officially recorded. This is a cumulation of certified world records for all 5 types of Marlin recorded. White Marlin, Pacific Blue Marlin, Striped Marlin, Atlantic Marlin, and Black Marlin. The size of these marlin represents the ultimate benchmarks for anglers chasing the world’s biggest fish. Special thanks to the IGFA for providing the photos.

Another, Atlantic Blue Marlin was caught by JPeter Ganz was estimated to be 1,400 lb. Believed to be caught off the waters of the islands of the Azores, a Portuguese archipelago – near the Faial Island. This fish was not hauled in but was tagged, revived, and released back to the waters. For sure, this fish is among the largest Marlin ever caught.

Jacky Delbrel caught a 1,189 lb Atlantic blue marlin, again in the part of the Atlantic Ocean in the Azores, near the island of Faial. This catch holds the IGFA 80-pound world record for Atlantic Blue Marlin.

I saw a 1,157-lb Atlantic marlin was caught by Jean-Paul Richard in Madeira. Caught along with this thousand-pounder was a slightly smaller thousand-pounder weighing 1,028 lbs. Clearly two of the largest Marlin ever caught in those waters.

Even though on June 26, 1974, the first thousand-pounder marlin was caught off the Oregon Inlet by Jack Harrington. Among the largest caught to date, this is worth mentioning especially since not too many thousand pounders have been caught. This marlin weighed 1,142 lb.

Tracy Melton caught an Atlantic Marlin weighing 1,083 lbs in Madeira. However, it was caught with an 80-pound tackle.

Firstly, never put yourself in unnecessary risk, while there are plenty of Marlins caught that are not listed here. The risk versus reward is not worth the record so we know there is heavier Marlin than these that have been caught. There are also talks of the fish weighing as much as 2,000 lbs which were almost caught.